Milford sound lies deep within the Fjordland national park in New Zealand. This is one of the country´s most stunning natural attractions! With high snow-covered mountains, standing in the deep turquoise waters on the southern island of NZ. We went there and got ourselves onto this very touristy boat ride. Our original plan was to hike the Milford sound trail, which is a 4 day hike circling these beautiful surroundings, but what we didn´t think about, was that the Milford sound trail is highly popular and it need to be booked, many month, in advance. How naive of us…. But most of the time when we are travelling, we just rock up to stuff we want to see/do and it is available, so we´ve gotten pretty spoiled that way…. Stupid popular hiking route!

Anyways! We went on a boat, that goes out to the sea and back again. And we were speechless the entire time. So incredible beautiful! I have no words to describe it better than that. 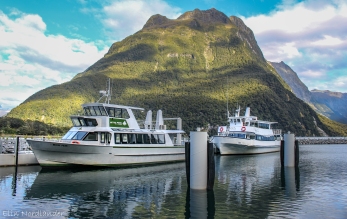 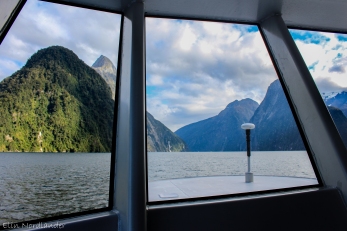 Inside the cabon of the boat. 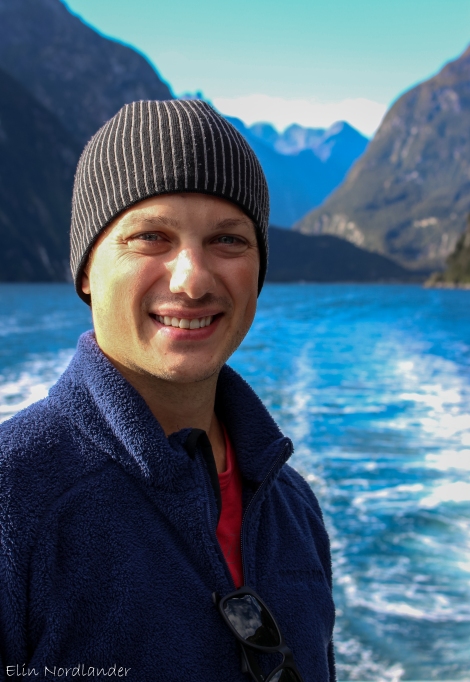 When we reached the sea, we got the chance to encounter some sea lions, these cute fluffy cigars were lying around on the mountain blocks of the edges of the national park. We even got the chance to see two of them fighting. I´m in the process of making a video from the fight, but I have too much to do and too little time! So it might take a while…

After being sick of starring at sea lions, they turned the boat around and went back towards the harbour. On the way back they stopped at this huge waterfall and put the fore of the boat into the fall. The water is extremely deep everywhere and you can be just a couple of centimeters from the edge of the mountain without hitting the bottom. The waterfall is just stunning and very impressing. Many kayakers also found their way here to be amazed by the paradise that is Milford sound.

Wet from the waterfall.

Håkan shows himself of!

How to get there

You can fly in to Queenstown and then take the first best bus that goes to Milford Sound. Or you can do what we did: drive around the entire island, end up in Te Anau, get disappointed that you can´t hike the Milford sound trail, drive into Milford Sound, pay people to take you to the sea in a boat. Look at mountains, sea lions and waterfalls and get amazed and less grumpy than you where before.

The Milford Sound is a must-do on every New Zealand itinerary. If you can, book the hike in advance and walk around these impressive mountains and fjords instead of just going on this 2 h ride (I think it was 2 h, just guessing here folks!). But if you don´t like walking, or maybe just like boats very much. Do this tour. Don´t miss out on the Milford, that´s all I´m saying. It is such a beautiful memory to have!

Milford sound reminds me a lot of the fjords of Norway. And since I love Norway, I also love New Zealand.
I will give Milford sound a solid five out of five stars:

Have you ever missed out on an opportunity? Tell me, it will make me feel better about myself.:)
Have a nice day,