So I went on a crazy streak back in 2011-2012. I was so sick of doing nothing, having boring friends, being a blank space in universe and seeing my life slip away between my fingers. So I wrote a bucketlist. I might have been inspired by the movie: the bucketlist… 😉 And then went on to do one adventure after the other. And one of those things I REALLY wanted to do was to get my diving certificate…

My friend Martin and I planned on going to Mabul in Malaysia. This is a really small island outside a big island (Borneo). We read that the diving was superb over there! Well, actually it is a world-class diving spot, especially around the island of Sipadan (which is an extremely small island, outside a really small island, outside a big island.) Martin already had an open water license so I studied all the theory back home before we left, to save us some time on the island. After that you only need a couple of dives and you´re certified!

The island of Mabul, where we stayed, is such a paradise. It has those small bungalows, that lies above the seabed, you see on postcards. It has white beaches, a turquoise sea and palm trees. What more do you need?

And the diving is to die for! Instead of practising your first diving attempts in a boring pool in some hotel complex you just walk down to the beach and plunge in the real deal on your first dive. It is great! 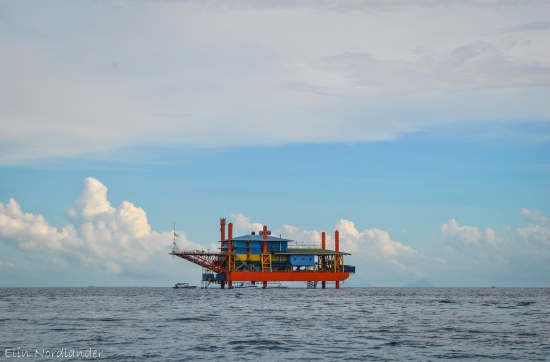 Some kind of oilrig? 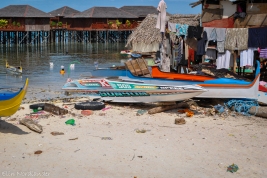 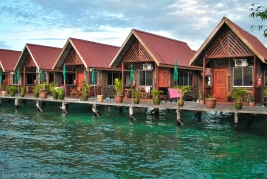 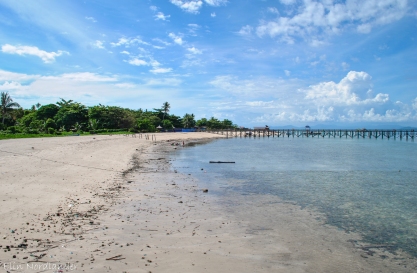 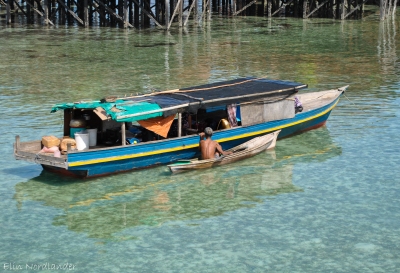 As I have mentioned before, I´m very scared of water. So this was one of the scariest moments of my life. First dive is all about getting comfortable with the gear and testing to breath underneath the water. It is really weird at first… They also make you take off your mask, under the water, and keep on breathing. This was very hard for me because apparently I can´t breath through my mouth without breathing through my nose, at first anyways. So every time I tried, I was breathing in water, panicking, and rushed out of the water (we were only at like 1m depth). But I had a really good scuba instructor, so she´d help me and calm me down, and everything went easier as the days passed by. And I learnt what I had to do survive in the water, to keep calm, to use as little air as possible. Finally, I really started enjoying myself. 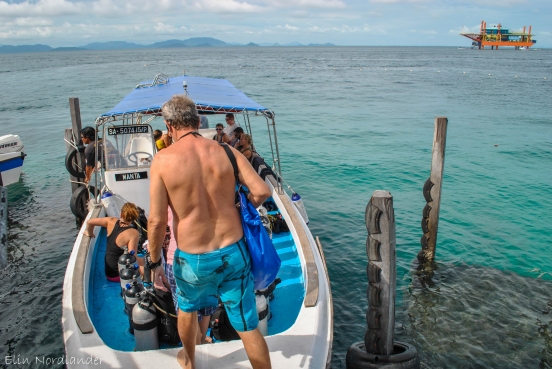 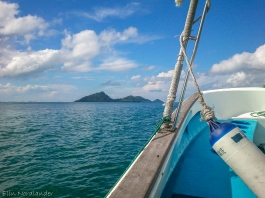 On our way to somewhere. 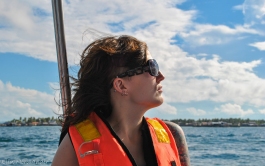 I´m sorry to say I didn´t have a decent camera for taking photos underneath the surface. Today I´m really grumpy about that. This is one of the best places I been diving so far (been diving in Indonesia, Fiji, Tonga, Australia, New Zealand, Sweden and the Philippines), and I have nothing to prove it for. You have to take my word for it, it is truly spectacular and there´s an abundance of life in the area. The sea turtles are gigantic and there´s hammerhead sharks to be found! It is freaking awesome to dive around Borneo!

We stayed at both Uncle Chang´s and Scuba Junkie´s resort on Mabul. We were thought not to interfere with the wildlife, pick up garbage if we found any and not to break corals. We were being decent human beings, simple as that. But there was this luxury resort on the other side of the island…. we called it: Evil Corp. The people staying there (a majority of rich, white people from the states…) was not told to be careful with this natural paradise. They were hitchhiking on sea turtles, breaking corals off to take home as souvenirs and being douches in general. Yeah, we hated that place and those people. But at least it was beautiful to look at! 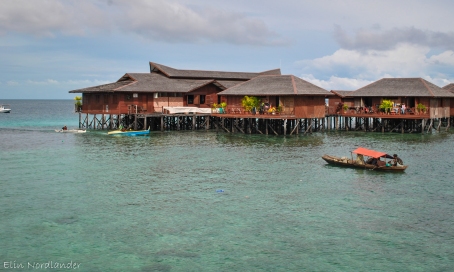 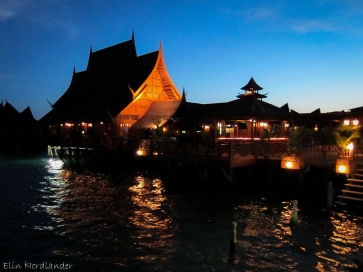 “How neat!” You are thinking now…. “She´s going to tell me something disgusting!” And yes! You´re right! Well, it´s not THAT disgusting… I spent 8 days diving in Mabul, Sipadan and surroundings, and it was awesome. The only problem was, when you´re renting gear, it doesn´t alway fit like a hand in a glove, or in this case: a foot in a flipper. I got huge abrasions on my feet. After these 8 days of being in the salty water and getting dirt all over, I got massive infections in both ankles. My ankles grew to enormous sizes! And I felt really sick for a couple of days before the swelling went down. Why am I telling you this, you wonder? Well everything doesn´t always go as planned. You always see those picture perfect holiday photos. But I want to show you the real deal, behind the scene, of those picture perfect holiday photos. So here it is:

Even though I got ankles of an elephant from this journey of becoming a certified diver. It was totally worth it. I have enjoyed my certificate many years  after this and been diving on many adventures. The earth is big and wondrous, and the life underneath the sea even bigger. That´s something most people miss out on. And that is a shame. So go get your divers certificate and see for yourself what is down there. You will not regret it…. I swear to God! 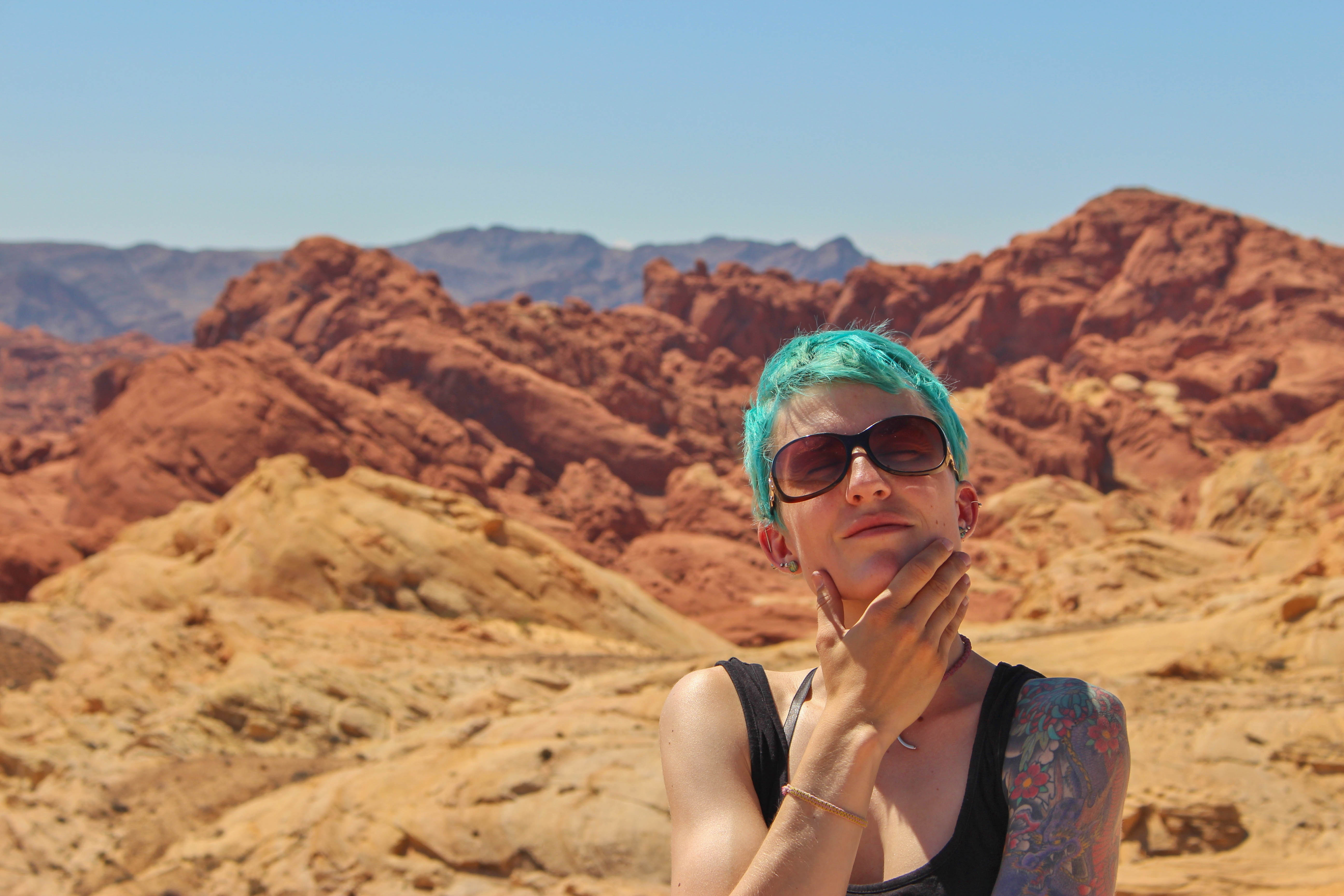